In the world of sweets players take control of a herd of pudding citizens who are trying to save their princess, has stolen a bunch of quarks evil. For each level, a bad pudding are protective structures made of different materials such as chocolate and biscuits, jam drops, and the game is to remove all evil quark levels. Using a catapult to throw pudding players end result, is to hit a quark evil, right or damage to structures, which would collapse and kill the evil quark. The various phases of the game, add objects such as exploding desserts can be found in the levels, and can be used in combination with pudding. 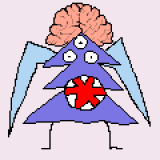